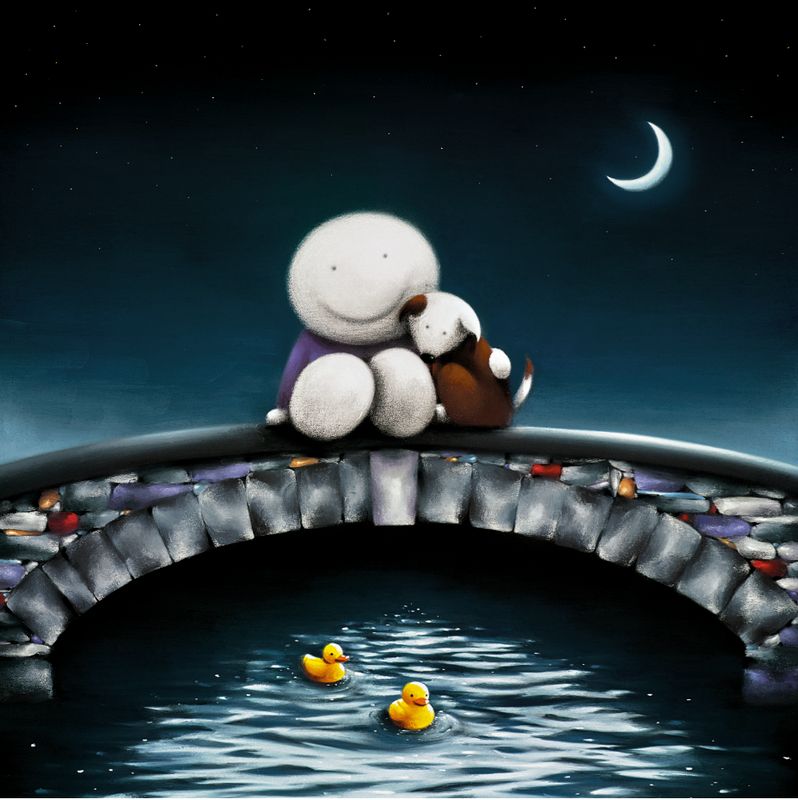 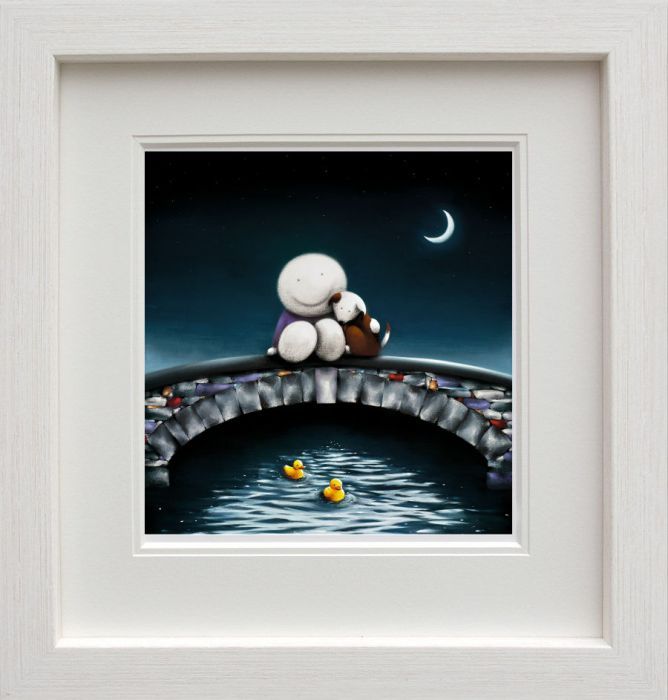 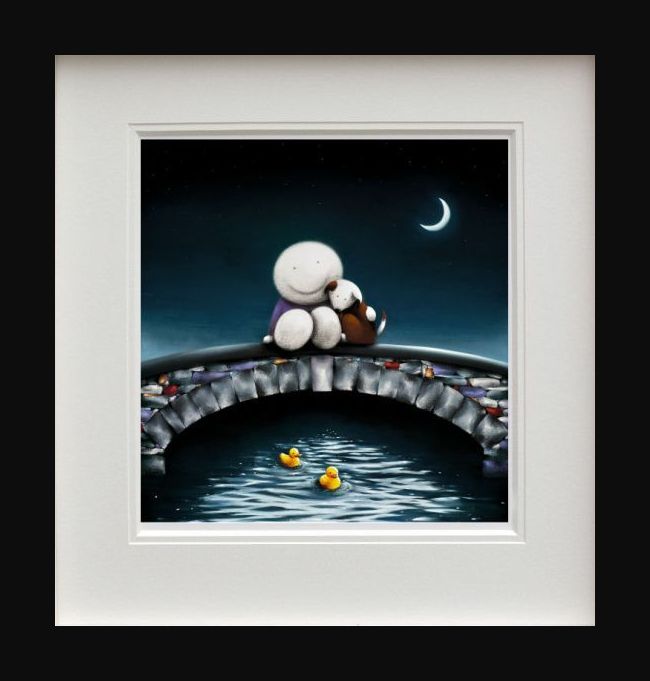 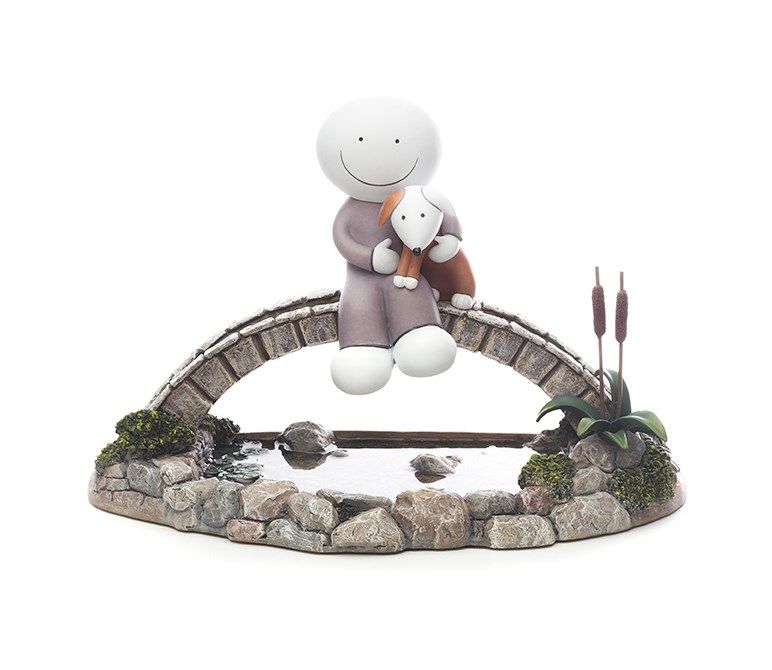 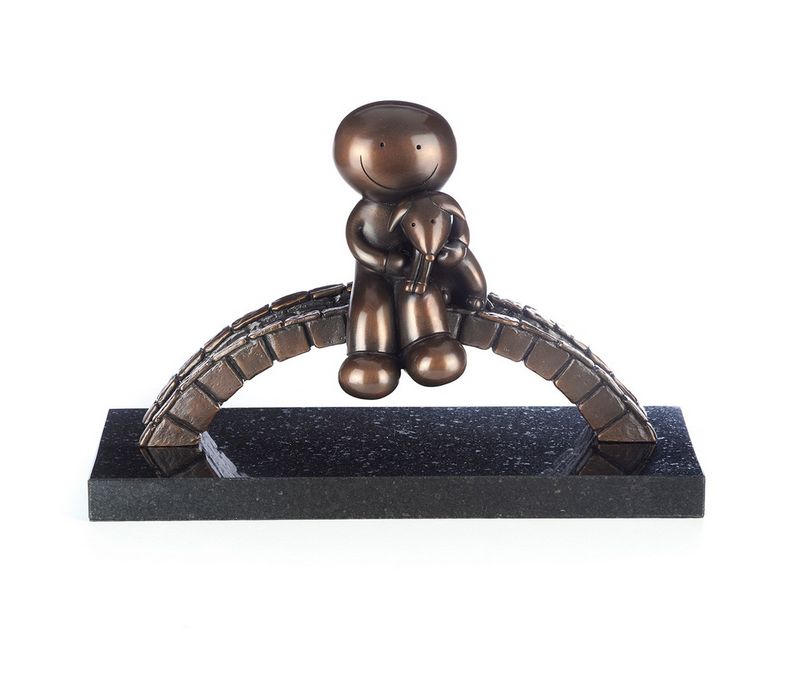 'Watching The World Go By' is now released as a limited edition print with Doug’s human character and Fuzz the dog embracing on the little stone bridge, under the magical moonlight!

But what's that we see in the water? It's two little yellow rubber duckies, come to life and heading down stream.

I love how the bridge is set off with multi-coloured bricks, as the picture lights up with colour.

The response to this latest limited edition sculpture by Doug has been overwhelming; a simplistic and yet profoundly satisfy scene of the human character (in purple) and the brown and white dog, perched on a little bridge over a stream.

As they sit and relax, the slow steady flow of water is relaxing and soothing, as they enjoy the beautiful day that is about to unfold before them.

There is lots of attention to detail here by Doug, from the stone bricks, the moss and the two little bulrushes, gently swaying in the cool summer breeze - bliss!

A stunning new release for August 2019 and this is one of pair of new Bronzes, the other being: 'The Great Outdoors.' Incidentally both where 'duel' releases, with matching Porcelain sculptures of the same name being released too!

There is something about this quaint little scene – a certain je ne sais quoi - that works beautifully with the bronze art medium. A man and his dog enjoying quiet time together on a little bridge, overlooking the calm running water of a rock and flora filled brook.

(I’m not going mad, check out the Cold Cast Porcelain version to see the water, rocks and thistles galore!)

There is a certain buzz when Doug brings out a bronze, largely because they are released so sparingly and this is the first since the immensely popular 'Hand In Hand - Bronze' (2018). Therefore, they are extra collectible and usually a very low edition, this one being just 250 copies.

The beautiful marble effect plinth that this bronze sits on, is definitely the piece de resistance of the sculpture and elevates (literally) the whole piece.

Watching The World Go By

Is It A Bird? Is It A Plane? - Sculpture

A Cup Of Love - Black Framed

Love Comes In All Shapes And Sizes - Black Framed