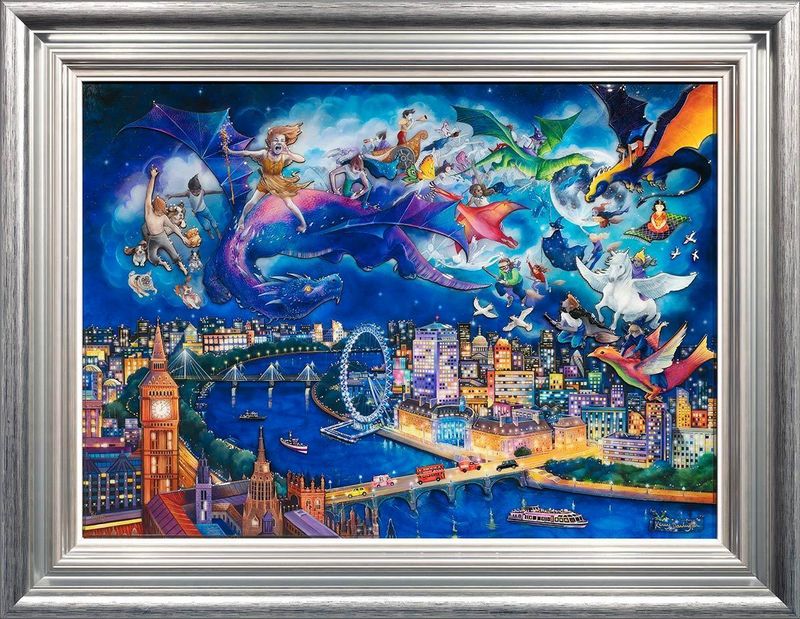 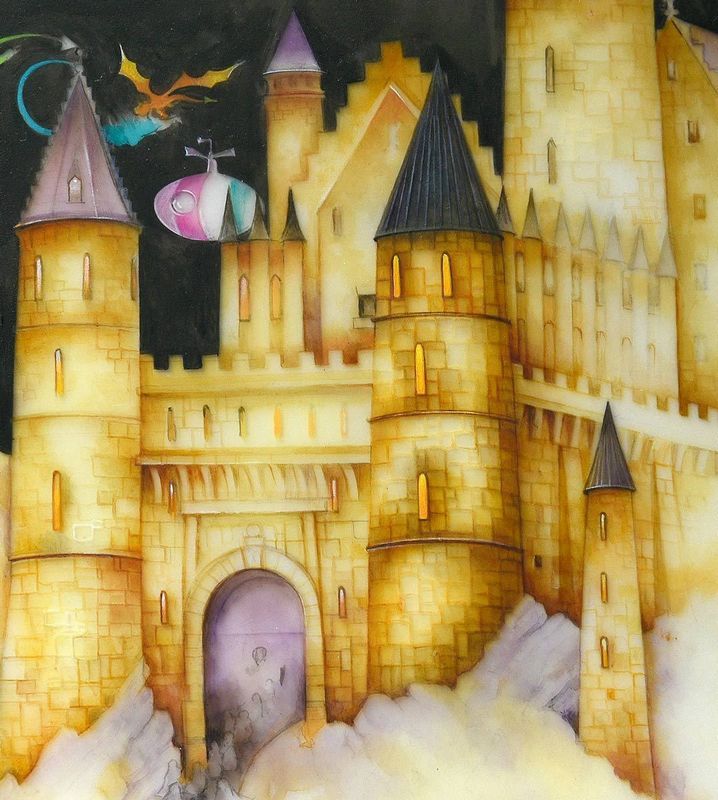 Here's a sneak peek at the forthcoming Kerry called 'The Worlds Collide' and if the 'sneak peek' image is still up you will only be seeing the face of a dragon on a blue canvas background – a small section from the actual limited edition canvas print!

We know it will be an edition of just 195 & the size details, so pre-orders are being taken now by us and sellers around the UK, so early purchase is advised.

The piece should be released officially in the 2nd week of September 2018 and we are very excited to see the full size image! - item has now been released.

Artwork is now live please & the name has been revealed as (artwork is here:) 'Flight Of The Dragons'

The release of the follow to 'The Worlds Collide' (September 2018) unique edition is nearly upon and various snippets of the image have so far been released and can be seen within our Facebook album.

The first image was a fairy castle (currently being used as the image) with dragons and what appears to be an egg shaped, multi-coloured airship hovering over the castle.

The second features a very elf like looking boy (Peter Pan?) ,with a magical cape and holding on to a gorgeous looking purple dragon & let’s hope friendly!

A third image reveals a boy (perhaps one of the ‘Lost Boys) standing up and balancing on the back of a griffin and a small lady with flying googles piloting a marvellous machine of some sort, with helicopter like mini-rota blades.

The so far latest image (fourth) is an expansion on the 2nd and we see the outline of a floating ship in the sky and half the body of what appears to be an elf like creature or a pirate on a floating ship!

We encourage you to look at the image of ‘The Worlds Collide’ on our site: https://www.pictureperfectgallery.co.uk/the-worlds-collide

…for more clues as to what artistic treat awaits.

The latest release will be an intermixture of fairy-tale, folk law and storybook imagery. Whether that also includes a scene overlooking London, remains to be seen but the images so far are taking you to unseen magical places; the fairy-tale awaits and will be revealed in April 2019.

Pre-order your addition with us to avoid disappoint, the more popular the unique edition, the quicker the sell out in galleries.