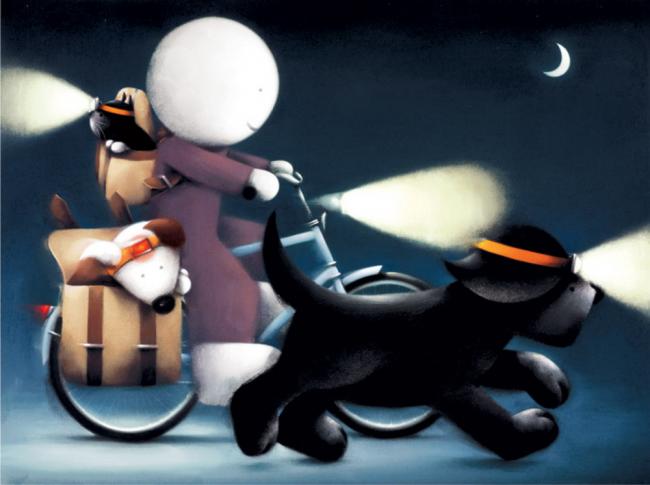 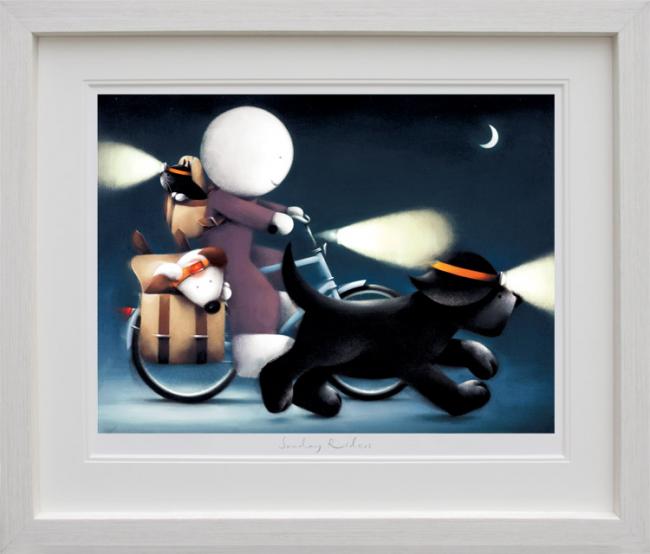 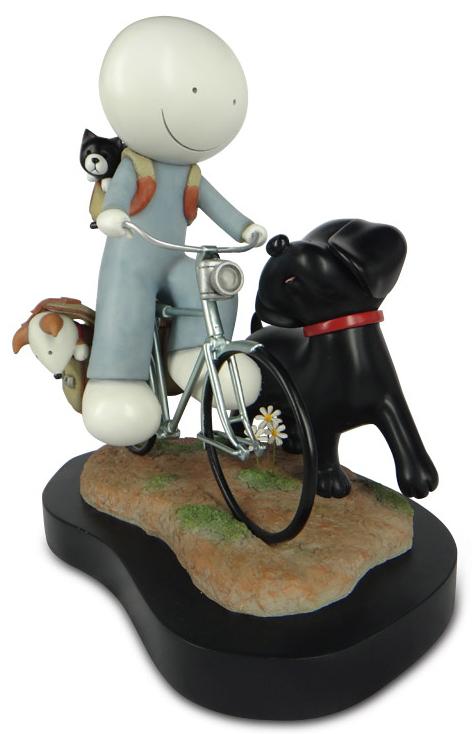 There is nothing better than a fitness inducing bike ride but why not beat the crowds and take it at night?

Doug paints our hero's out for a midnight jaunt but its safety first here, as the human character uses the bikes front light and 'Monty' (the black dog), the black cat and the brown and white dog all have their own 'head lights.'

A lovely new image, set on a beautiful royal blue background and with iridescent light given off by the magical half-moon Doug has created - reminding me instantly of Doug's moon series of picks such as: 'Catch A Falling Star' (2018) or 'Dreams Can Come True II.' (2014)

This new release ‘Sunday Riders - picture’ accompanies a sculpture released at the same time with the same name, perhaps a first for Doug Hyde.

This doesn’t usually happen at the same point, one is normally released at a later date and this is an indicator of the popularity (usually a sell out) of the previous.

So it seems Doug is treating you, his fans, offering you the art collector the choice to own his knew creation in sculpture or print form, or indeed both!

With a deep royal blue, background colour and the half moon visible to the top right of the limited edition print, this picture has a feel of adventure and excitement as the team race onwards, their torches shining the path.

There is a certain softness to the picture with the white of the torch light, the silver of the bike & the reflection on the floor and on ‘Monty’ the black lab – his back, hind leg, his paws and his nose. Doug once again takes a simplistic image and imbues it with artistic skill and a charm that only Hyde can.

In the 2nd of two new sculpture releases (the other being ‘Hold On Tight’) for Autumn 2016 we have the humorous: 'Sunday Riders.’ The matching limited edition print of the same name has also been releases and at the same time – quite rare for Doug Hyde’s work!

The gang includes: Doug's character in the blue clothes, the black lab, the brown and white dog and the little black cat in a satchel! They are all out for a Sunday bike ride and having a whale of a time.

In fact, the human character appears to be carrying two of the three pets inside his bags and it is the black Labrador that is having the nice little run alongside them! Very reminiscent of an older limited edition print 'The Stowaway.'

Its Good To Be Bad - Sculpture