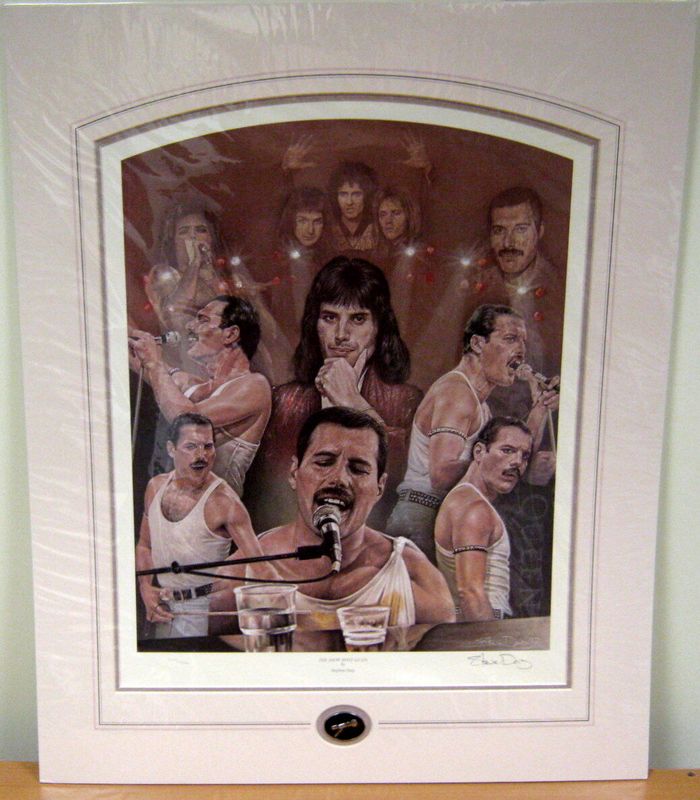 We have a few brand new copies of this print in our archives and released for sale.

Brian May, Roger Taylor & John Deacon are painted in full 70s ‘look’ in the centre (their long hair is the give away!) and one or two 70s and later 80's images of Freddy are present. But the artwork’s main attention is focused on Freddy and his iconic Live Aid performance in 1985 and the impact that short set would have on the music world and their legacy.

We have seen within the last 6 months: ‘Bohemian Rhapsody’ the movie in cinemas and going on to becomes the highest grossing musical biopic of all time, along with a whole host of box office records continuing to be smashed.

In early 2019, Rami Malek wins an Oscar for Best Actor for portraying Freddie Mercury and Queen even performed in the opening for the event. Interest in Queen and the life of Freddie Mercury is at a high but do you think it ever left the nation’s consciousness?

In the 1990s, artist Stephen Doig was commission by his publisher to create limited editions of iconic music legends and went on to paint: Elvis, Barbra Streisand and John Lennon to name a few. But when the artist turned his attention to Queen & Freddy, he would create the limited edition ‘The Show Must Go On’ and it would become one of the fastest selling prints of the decade (all 950 copies sold out in record time)

Take this opportunity to own this unique piece of memorabilia artwork.

Queen - Freddy Mercury - The Show Must Go On

🗹 All our prints are hand signed and numbered by the artist 🗹 And carry an Official Certificate of Authenticity.

Fight To The Finish - England vs Australia 1995

Sweet Chariot - England vs All Blacks 1993

Roar Of The Lions - British Lions vs South Africa