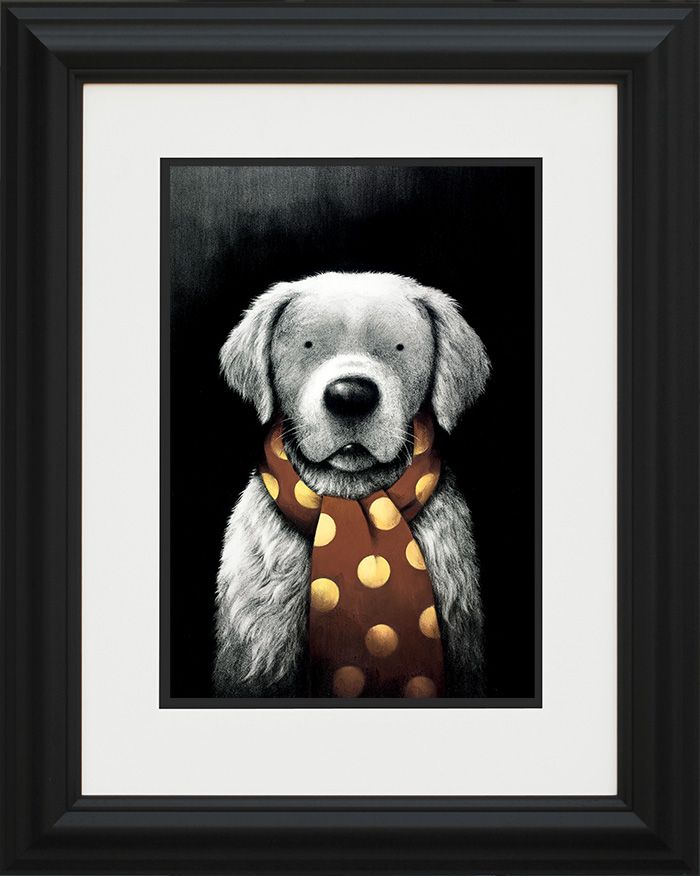 There where four limited edition pictures in this 2017 series of prints of black and white painted dogs, In multi coloured scarves!

But I tell you something, I'm have trouble picking my favourite from the: French Bulldog, Pug, West Highland Terrier and this lovely Goldie, as I want to take them all home - which one would you pick for your home first?

An interesting choice of scarf colours with a rich chocolatey brown tie with lush golden spots, perhaps a pun on the breed's name but 'Man's Best Friend' they all are no doubt!

I don't think a more lovable limited edition print of a Golden Retriever exists, well Nigel Hemming's 'Patience' maybe a contender but certainly this is Doug's nicest image so far.

A simple image indeed of 'Man's Best Friend' and here he is, a Golden Retriever posing for a family photo and which is essentially a black and white image. However, much like the Christmas release images 'The Lost Reindeer' collection, this black and white limited edition is brightened by Doug painting an object with colour.

Here the artist chooses the Goldie's scarf and rather dashing it is! Brown and yellow tonnes are synonymous with the breed and Doug has captured the softness of his coat and the lovingness in his face.

This was part of Doug's second phase of releases for the 'Top Hats And Tails 2' collection of dog related prints, and previously sculpture.

Beware Of The Dog