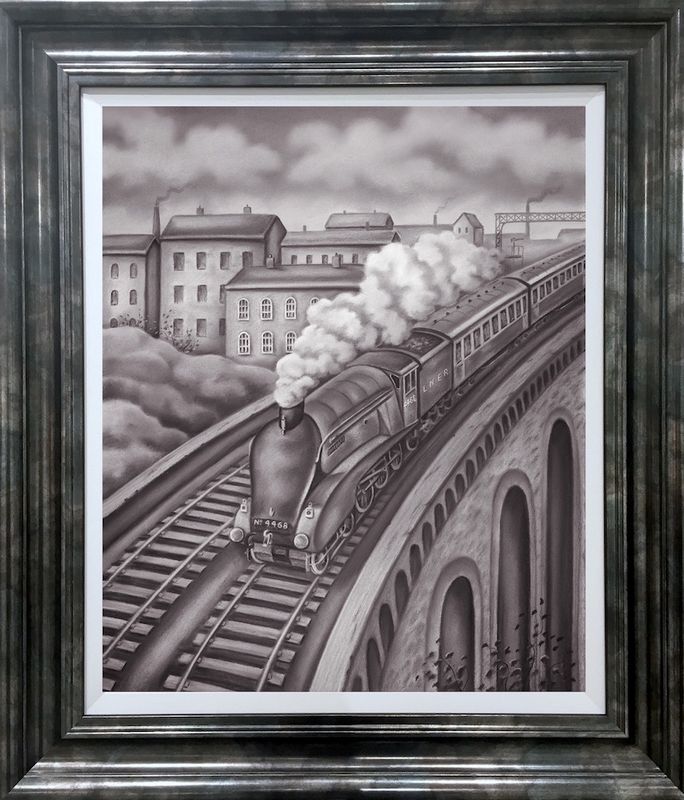 No not the duck 'Mallard!' but the fastest steam train in the world, a record achieved and unsurpassed since one fateful day on the 3rd of July 1938.

Paul turns his artistic hand to one of the most iconic steam locomotives in Britain the ‘Mallard,’ often seen painted in the famous LNER garter blue with red wheels. If you have followed Paul Horton’s published art career, his paintings reflect a deep respect and fascination for Britain’s industrial past and bygone days; growing up in the East Midlands the artist was himself surrounded by industry.

No surprise then that Horton is partial to a spot of train spotting and here he recreated the famous train in a beautiful monochrome coloured, limited edition canvas. With the familiar nod to northern industry behind the train, the furnace chimneys ablaze and the work houses burgeoning with sweat and toil.

A nice touch the number plate is absolutely correct with '4468' better known as 'LNER Class A4 4468 Mallard.' for all you train buffs! and the trains furnace is fully stocked, as steam pours from its own chimney!

(LNER stands for the ‘London and North Eastern Railway’ company)

Love Is All Around

At The Heart Of It All - Canvas - Framed

On The Sunny Side

When I'm With You - Framed

Still Of The Night

The World Through Vincent's Eyes