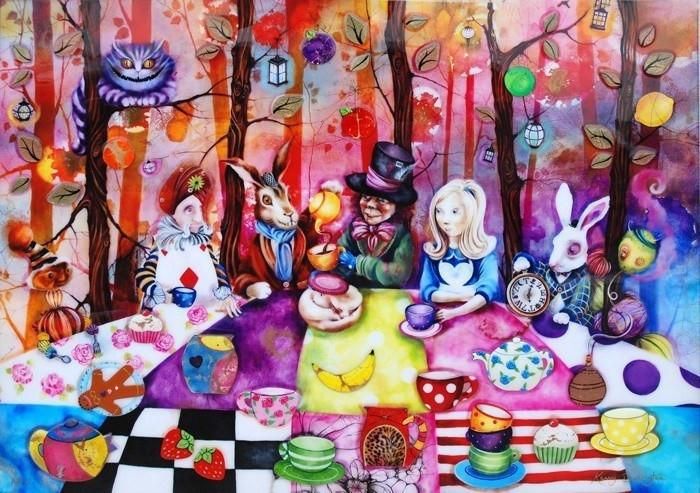 This artwork depicts Alice at the Tea Party, with an ensemble cast of all the main characters: the Mad Hatter, Queen Of Hearts, Cheshire Cat, White Rabbit, March Hare etc.

This beautiful image has been reproduced from Kerry's Original artwork; each has unique hand finished 3D Objects added, making every limited edition different!

A limited edition of just 150 copies & almost indistinguishable from an original, each is hand painted and therefore has its own unique finish - and have since been dubbed 'unique editions!'

Previously customers may have seen an image of Kerry's they wanted & then found out it was a 'one off' original artwork. With the limited edition series, customers will be able to see an image & provided they move quickly, can purchase one from the 150 limited edition that have been created.

Join Kerry as she takes you on her very first journey down the rabbit hole! The follow up to this would come later that year with the super popular: 'A Happy Un-Birthday To You' (May 2012).

by Kerry Darlington We're still able to process and ship orders via our website during the corona virus restrictions. And answering calls 7 days a week.

East Of The Sun, West Of The Moon

Beauty And The Beast

Hill Of Imagination I - Original - Framed