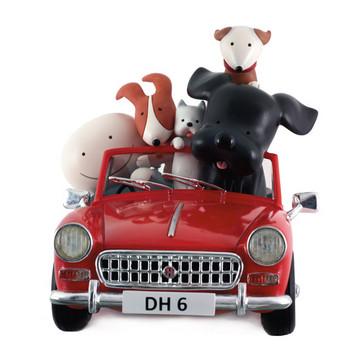 This is almost the direct follow up to 'Go Faster Stripes - Sculpture' (number plate 'DH 1') from September 2010, Doug's very first sculpture of a vehicle, except this time the mini is painted red - but we still have 4 zany dog characters standing up in the car, getting a nice breeze and a blow dry!

One could argue it is the same sculpture but reimagined, as Doug did last year with many of his classic limited edition images in his '10th Anniversary: Love Counts' collection of prints, deluxe canvas's and sculptures. People have really connected with Doug Hyde's vehicle series and this is sure to be a fast sell out, so we do recommend buying as early as possible.

In The Fast Lane

by Doug Hyde We're still able to process and ship orders via our website during the corona virus restrictions. And answering calls 7 days a week.