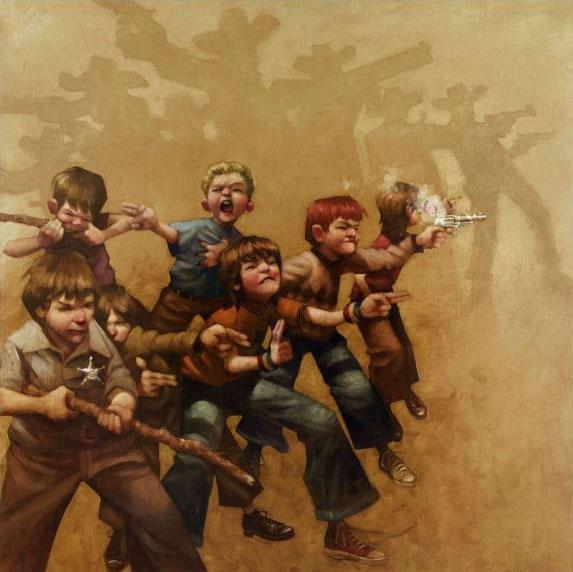 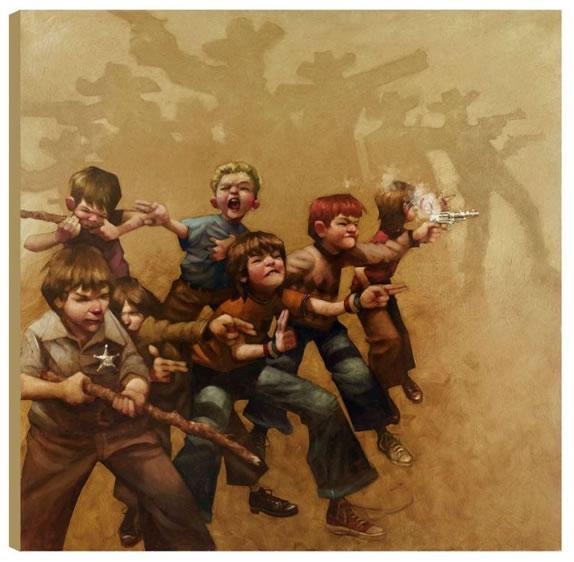 ...is obviously an inspiration for Craig Davison and something he must have watched as a child, as many of his limited editions have been inspired by it.

On this occasion 'Guns of the Magnificent Seven' limited edition is a nod to the 3rd in the series from 1969. Seven boys face us in this artwork and in the shadows of the picture they are imagining themselves as a bunch of heroes in the old wild west.

'Guns of the Magnificent Seven' is a new piece by Craig Davison and this box canvas version means it is ready to hang on a fitting on your wall, no messing about!

Seven youngsters square up against a rival gang, or as often is the case an imagined enemy and try to defend 'their territory' with their guns (cap guns) and riffles (sticks); did you notice the Sheriff at the front leading them? you did see his badge right?

I love the small detail in this limited edition print.

There are five brown haired boys and one with blonde and one with red hair and these two colours have a 'cartoonish' surreal feel about them - makes sense really with Craig's background as a comic strip artist.

I remember having the kind of enthusiasm that this young lads have on their faces, almost just shouting for the hell of it they are having so much fun, they are probably thinking: Who needs the moves?

We are making our own western!

Guns Of The Magnificent Seven

Way Of The Darren - Artist Proof

Yeehah The Return Of The Magnificent Seven