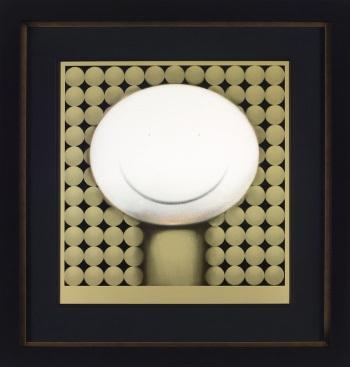 The publisher has recently said about the finish on this limited edition: 'A unique print with an additional application of gold foil.'

The second of two new limited editions for Summer 2016 in tribute to the Olympics, (the other being ‘Bronze, Silver & Gold’) this piece we have been told will have a special metallic finish, never before seen on Doug's art.

Doug feels the meaning behind 'Going For Gold' is that every athlete's dream is to stand on the podium and win an Olympic gold & this new artwork perfectly captures the essence of that belief. A stunning naive & contemporary image but instantly recognisable as a Doug Hyde limited edition, with the single character in the familiar pose in gold clothing and the black background is filled to the brim with gold balls…

…I wonder if that's a reference to Doug's love of football or 'Golden Balls' himself David Beckham? I can't help but think of the BBC1 quiz show of the 80s and 90s called 'Going For Gold' presented by Henry Kelly, and I wonder if this is Doug's tongue in cheek nod to the programme!

The Many Faces Of Love - Book