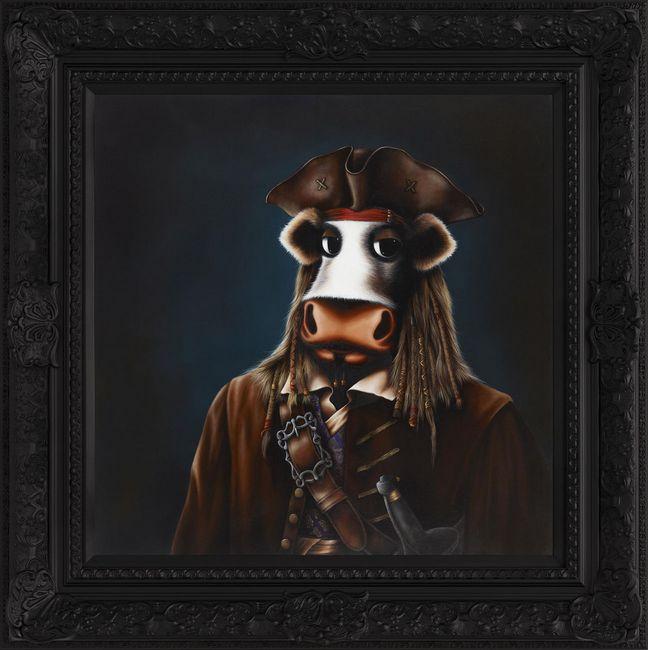 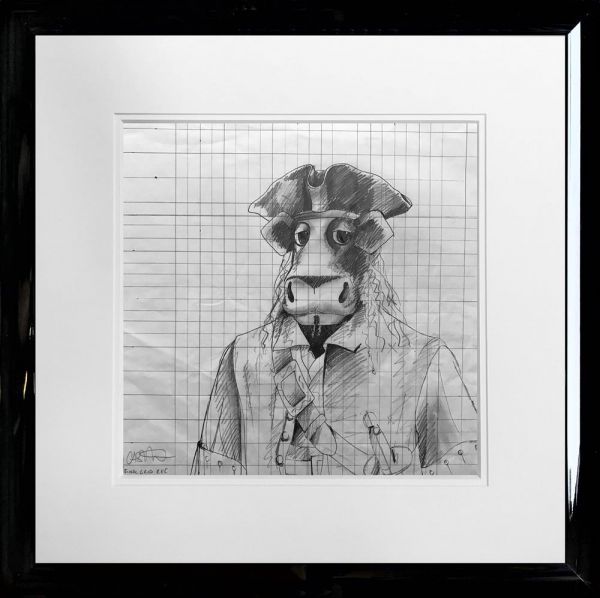 Caroline has created her own Cow Superhero painting, the swashbuckling Captain Jack Sparrow from Disney's 'Pirates Of The Caribbean' film series, played by the lovable Johnny Depp.

Fancying himself as a Johnny Depp, the humourous cow poses in his pirate finery and the title brings home the good nature and light-heartedness of the piece!

This fantastic Limited Edition Giclee on Board comes framed and so heightens the presence of the character!

Looking closely, the cow even adopts the same plats, beads and dreadlocks as the Character Jack Sparrow from the movie Pirates Of The Caribbean and this makes the image ever more so amusing!

This is certainly true of Shotton's style and is a brilliantly quirky release for her spring collection!

In what could be a reworking of Caroline's original drawing that produced the limited edition 'Arrrrrgh!' in 2013, here we have the similar named 'Arghhh!' - Original Sketch.

Both are a tribute to the swash buckling pirates we know and love from our childhood bedtime stories and perhaps dastardly ones like Captain Hook from Peter Pan!

Caroline's range of limited edition depicting famous characters from TV, Comic and Movies are highly collectable and who could forget her paintings of: John Wayne & Del & Rodney from the fancy dress episode, tributes?

Anyway, I like to view this sketch as a Johnny Depp one, dressed as the iconic and lovable Jack Sparrow - now, where's my rum shipmates?

The sketch size is 29 cm square and the framed size is 40 cm square, in a beautiful and sophisticated black.

It Wasn't Me - Original - Framed

If Music Be The Food Of Love