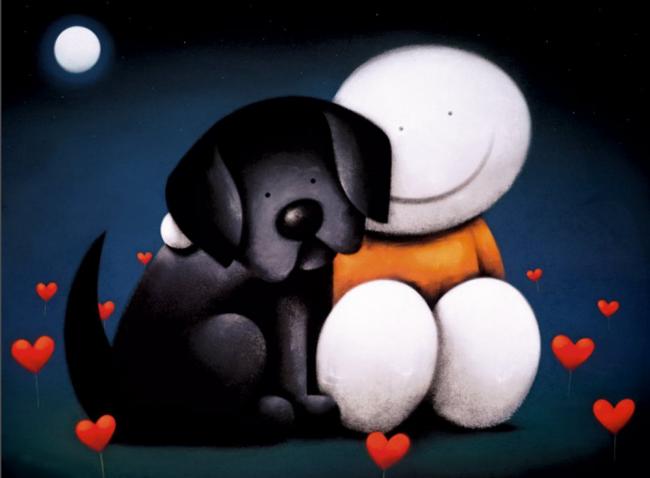 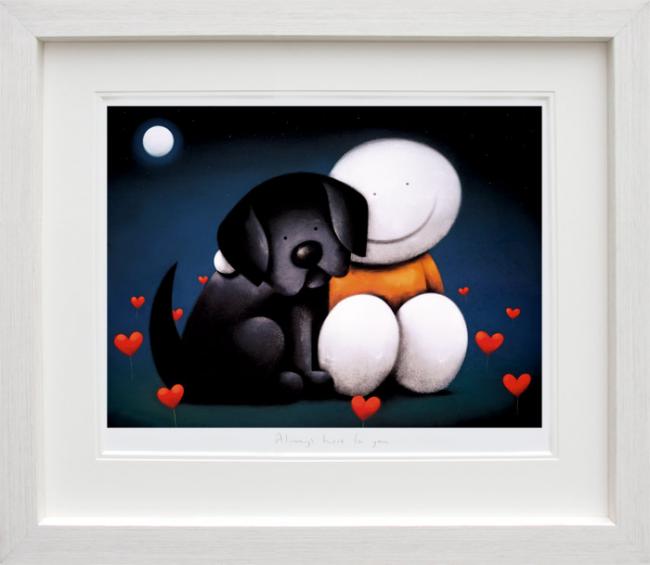 A heart-warming new image by Doug Hyde and we have heard this is to be the only 'Classic' style he will be doing until September 2014!

A quick sell out is expected on this giclee art print. This lovingly created piece has been suggested as a Valentine gift; featuring one of the most iconic pairings of Doug characters...

...the man and the black dog, which has headlined many of his most sort after Limited Edition prints and started way back with the iconic limited edition print: 'Beware Of The Dog' (2004) featuring the loveable 'Monty' the black dog.

A simple image of a man and his dog sitting peacefully in the moonlight, surrounded by a field of hearts. A quintessential Doug Hyde image and one sure to melt your hearts.

Did you notice the subtle moonlight reflection on the dog? With Doug's use of white paint on the dogs black fur, it's little touches like these that really bring these limited edition prints to life.

The hearts also look like balloons, about to float off into the night sky. These paintings featuring the black dog character have an added attraction, as many dog owners simply love him for what he is, a dog! & therefore want to buy the print, perhaps without knowledge of Doug Hyde's collectability.

This was the official Doug Hyde release for Valentine's Day 2014 & proved to be a huge hit.

This was an edition of just 295 and although this is in line with today's edition numbers (becoming lower and lower) this is one image that would have easily sold through had it been say 495, next time Doug!

Always Here For You